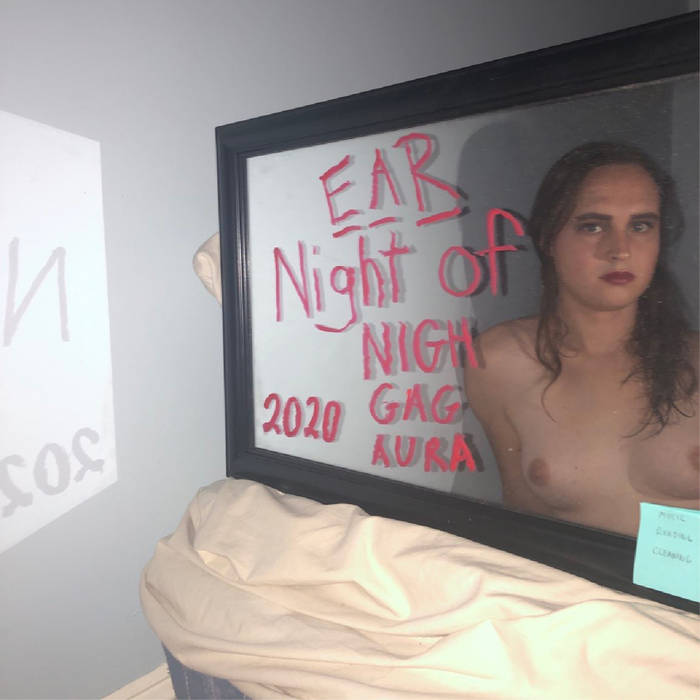 EAR’s inaugural release on Voluminous Arts, Night of Nigh Gag Aura, is a 32 minute live recording of viola drones with occasional interpolations of voice and auxiliary instruments. It is a one-to-one response to the 1965 Dream Syndicate (John Cale, Tony Conrad, Angus MacLise, Lamonte Young, and Marian Zazeela) recording Day of Niagara, which was eventually released by Table of the Elements in the year 2000. Night of Nigh Gag Aura’s reverberating expanse projects Gay, Trans, and Drag lineages backwards in time against the backdrop of New York’s “Downtown” avant-garde music scene; now a canonized history from which these lineages have been conspicuously absent. Both an archaeological and imaginative exploit, Night of Nigh Gag Aura finds one of its many sources of inspiration in the frequent collaborations between Jack Smith and Tony Conrad, whose friendship and rich body of work together has been gradually written out of the canons of both art and music worlds as the time and place they shared has become historicized and commodified.

Recorded in a Victorian house in historic Federal Hill, Providence during the late spring/early summer of 2020 while covid cases surged in the northeastern U.S. and rebellions filled the streets of many American cities, Night of Nigh Gag Aura reflects the times. An urgency to escape linear chronology permeates this recording. EAR considers the piece to be a culmination of a body of undocumented work. She was a conspicuous character in the music underground of New York, Providence, and Boston in the 2010s, performing invocations as Hanging Out is Spending Money and adopting her drag-adjacent persona Cassandra for multimedia culture-jamming spectacles; Night of Nigh Gag Aura, however, serves as a moulting of these past skins. Informed by a more private practice, EAR found the spirit in Day of Niagara and responded to it simultaneously as she reshaped it. “Recordings are portals,” says EAR, “if you jump in one, many more will open up.” Her viola dives in and out of the source material, a moving target, as she plays with rudimentary recording techniques as instruments unto themselves. Placing her recording device in a stainless steel mixing bowl causes a metallic resonance to take to the foreground as it competes with a laptop hum and batteries rolling across the ground. She keeps the listener’s attention on the space and the contents therein. Music can be transcendent but EAR finds grounding in the present, no matter how or when one presses play.