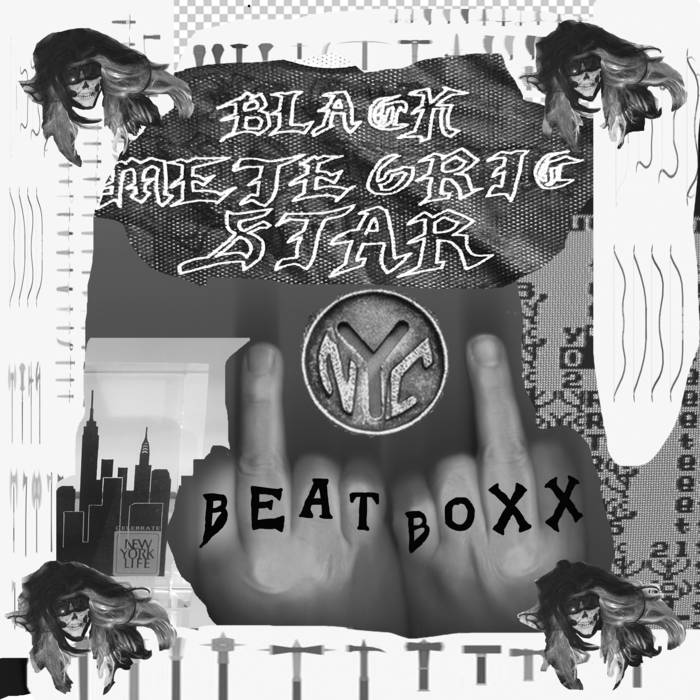 At the end of Rainer Werner Fassbinder’s 15 hour serial film Berlin Alexanderplatz, viewers are treated to a 2 hour epilogue permeated with snippets of Kraftwerk, dream sequences, fog and elements of drag. In the relentless spirit of that kind of head fucking, one proposal for how you might think of Black Meteoric Star’s new album NYC Beat Boxx is as a similar kind of psychedelic epilogue to last year’s epic 3xLP Disco. The comparison isn’t frivolous or light, considering Black Meteoric Star’s sound emerged during the time Rayna was living in Berlin. That city’s energy has continued to reverberate within the music she creates under the alias. While the queer creative legacies of Berlin remain, on Beat Boxx geographic focus shifts to New York, where Rayna lived from 1997 - 2004 and where she’s made her home since returning from Berlin in 2009.

With this explicit geolocation, NYC Beat Boxx draws inspiration from vinyl “beat collections”, which heavily circulated in New York during the 80’s, such as Apexton’s Rhythm Masters series. The beats on those records, conceived more as functional sonic tools rather than fully realized tracks, have an uncanny ability to crystallize the feeling of a moment within their repetitive minimalism. Some titles directly refer to this ability, such as “Acid 3am” and “One Night In The Bronx''. The Black Meteoric Star project consistently utilizes a tape deck Rayna was gifted for her high school graduation to function as a sort of sketchbook for ideas; this record is no exception. NYC Beat Boxx began while Rayna was still recovering from Covid-19 and unable to engage a full studio of equipment. Instead she focussed on drum beats alone, building tracks on an analog drum machine that were nearly complete without the addition of synths or vocals. Covid hit New York City particularly hard in those initial months of the pandemic and in March, April and May of 2020 the experiences New Yorkers were having with it were nearly categorically different from those of most U.S. residents because of the ways in which New York’s rhythm and culture of the street allowed the virus to spread quickly before quarantine measures were put in place. Even in its completed form, with synthesizer and vocal elements added sparingly, NYC Beat Boxx is both a celebration and evocation of New York, through rhythms that channel that same uncanny ability of the “beat collection” to archive specific moments in time and space. Club music has the distinct pleasure and purpose of giving us the opportunity to process emotions through our bodies, through dance; the rhythmic repetitions of beats, enticing meditations of sound. This offering by Black Meteoric Star honors New York’s history of consistently giving space for the healing that dance music provides, during the extremely challenging and isolating time which we continue to live through.

As Voluminous Arts’ lucky 13th release, NYC Beat Boxx also creates an opportunity to reflect on what the New York based label has accomplished in its first 18 months. In addition to releasing a spectrum of Rayna’s music; from newly recorded intimate cassettes like Transverberation, to archival gems like Crash Convention and RFNAL, to the previously mentioned epic Black Meteoric Star 3xLP Disco, the label also organized the first iteration of a now annual two day conference on nightlife; the Halloquium, and released Philadelphia based multidisciplinary artist Rat Porridge’s debut album Live from the Plant. Voluminous Arts also launched the articles section of its website, proposing new and more substantive ideas about the possibilities of music journalism.