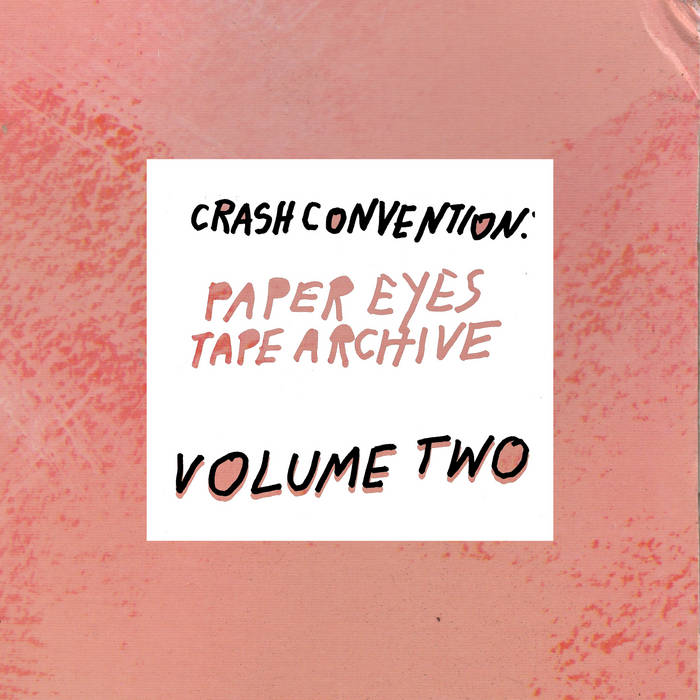 Voluminous Arts’ latest release “Crash Convention” is an electrifying collection of material from Gavilán Rayna Russom’s Paper Eyes project (1996-1998). While both previous archival releases of Paper Eyes sounds (2017’s “Source Cognitive Drive” on Ecstatic and “In A Cage” released by Voluminous Arts earlier this year) have stretched across the project’s sonic spectrum, from its most meditative expressions to the most ear-splitting, “Crash Convention” pulls some of the highest intensity and most mutant selections out of the vault. At the time that the Paper Eyes material was being recorded, first in Rayna’s home studio on 31st St and later at her place on the corner of Metropolitan and Roebling in Williamsburg, New York City was in a moment of dynamic shift. Gentrification was becoming mechanized, even more violently displacing and incarcerating some of the city’s most significant multi-generational residents, especially Black, Puerto Rican and Dominican families. The unbearably violent assault of Abner Louima by the NYPD and the subsequent attempted cover-up were activating increased waves of resistance to policing; a tone which had already been set in response to the LAPD’s refusal to be accountable for their horrifying assault on Rodney King, and the clearly racist murder of 15 year old Latasha Harlins by a store owner from whom she was attempting to purchase a $1.79 bottle of orange juice. In the midst of this, and while attempting to orient herself correctly towards the goals of these struggles, Rayna was herself in an extreme moment of personal upheaval; deep in a relapse of her drug addiction and alcoholism. In the golden window between rigid discomfort and total blackout she was catching traces and threads of her queer trans-femininity; an experience for which there was very little community or even language at that time. Paper Eyes emerged from an attempt to use fictitious narrative and fantasy to create context for these experiences. These sounds emerged from an intersection of a vivid imagination as it bears witness to harsh realities. For example, as mentioned in the liner notes of the “Source Cognitive Drive” release, Rayna spent many nights in the summer of 1997 sitting on her rooftop watching police coerce favors from neighborhood sex workers she had become friendly with. She also witnessed how the same police would harass and intimidate these women during daylight hours. Eventually they were arrested and did not reappear in the neighborhood. This was particularly haunting because of the way in which it emotionally drove home the sense of total lawlessness that existed among those who were making and upholding laws. Williamsburg was also still held in the grip of the late stages of the crack epidemic, in which policing played a vicious role. Living daily in this environment as a sensitive person with a liminal identity was disorienting, heartbreaking and rage inducing. She was often at a loss for what to do with those feelings and when they did not simply trigger a binge of one kind or another she brought them to her tape machines, her odd collection of instruments and the fantasy world of the Paper Eyes character which mirrored her daily reality in both obvious and stealthy ways. In her search for technologies through which to heal and be useful in re-orienting the society in which she lived towards something ethical and sustainable she was encountering Black trans-atlantic healing traditions that had been kept alive and innovated in neighborhoods such as Los Sures, where large populations of immigrants from Cuba and Puerto Rico made their homes. These traditions and the legacies they carried challenged her basic assumptions of reality, eventually becoming deeply transformative for her. The period during which Rayna did Paper Eyes was one of multiple thresholds, a fact that is physically apparent on these recordings. The works on “Crash Convention” are full of sounds pushed to their limits as well as fevered yelps, utterances, mumblings and other border state vocalizations. Mixer feedback, tape loops, toy drum machines and keyboards all crash together in a bath of distortion that makes the edges between sounds burst and melt. Beneath the antagonistic surface of these tracks is an engagement with sound as a physical material and a method for reclaiming time. While these foci had been central to Rayna’s earlier work in Music Program Zero, the combination of moving from a rural to an urban environment and the reemergence of her active substance addictions pushed her music into new realms of saturation and intensity. Combined with a desire to find some form of connection in any of the multiple scenes where she was hanging out and soaking up the creative expressions of others, this became the fuel that ignited Paper Eyes into being and set the project apart from her previous works in Soma and as Child. Reflecting on that time she says, “I felt extremely alone in what I was interested in and was always trying to re-shape it to fit the things happening around me that excited me. As a result, I was in an almost constant state of rage and/or anxiety. I wanted to destroy everything, especially genre and the limited way the market had programmed me and others to think about cultural materials. Many of these imperatives led much later to my starting Voluminous Arts, which of course I hope is a much more mature, and more sustainable and community oriented approach to them”.

This digital only release includes a download of visual materials from the Paper Eyes archive.