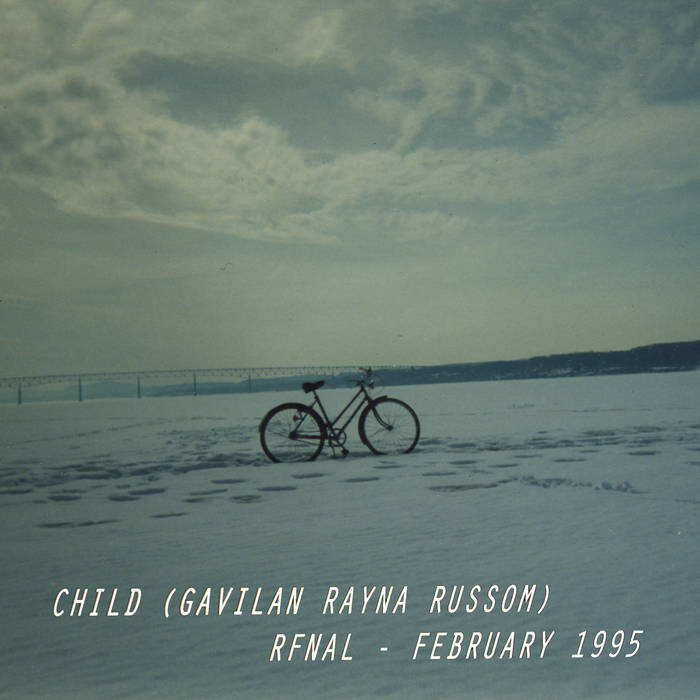 Voluminous Arts presents RFNAL, a 25 year old archival recording that crystallizes a significant moment in the development of Gavilán Rayna Russom’s music and thought. In February of 1995, when RFNAL was recorded, Rayna was 19 and had just moved to Tivoli, New York. She was beginning her second year of study in Benjamin Boretz’s “Continuing experiment in holistic development and inter-arts exploration”, Music Program Zero. The moment marked a node along a trajectory that stretched from her underground and diy roots in Providence; playing in psychedelic and noise bands and making home recordings, to the beginnings of a compositional process informed by multiple lineages, one in which the inherently political nature of creativity was central. Troubled by the relentless processes of cultural appropriation that seemed unbearably embedded into the work of making music as a white person in a media and cultural marketplace dominated by white superamicst agendas, she had begun attempting several years earlier to tease out and remove these threads from her own practice. This growing consciousness had prompted her to step away from DJ’ing and from the hip hop and acid house music she had been experimenting with and to step towards first founding Soma; a psychedelic noise band whose process was uncompromisingly improvisational, and then into creating atmospheric home recordings as Child that pushed beyond improvisation and into the genuinely uncategorizable. As she began to understand the limits and liabilities of this path of investigation in terms of genuinely addressing the issues of appropriation that initiated it, she encountered Boretz, who illuminated for her much deeper ways in which political oppressions reproduced themselves in the composition and dissemination of music. These insights extended to tight knit problems such as the primacy of melody and mono-vocality as encodings-into-sound of fascism, and to structures such as the western tonal scale as mapped on a piano keyboard as reflections of the rigid categorizations of heteropatriarchy. Her studies also exposed the currently dominant systems of commercial cultural exchange as fraudulent and harmful. Much of what was transmitted to her during this time is summed up in this quote from Boretz’s liner notes to 1988’s Open Space audio CD 1:

“...Do I have to tell you about the spiritual cannibalism of the culture, our culture, which has been bombarding us with ultrasensory overstimulation aiming to reprocess us into fulltime consumption machines, stealing above all from us our time (not an inch of time without an imprint of message), and even our very sense of time (to be measured in lengths of no more than one message unit each) under the guise of entertainment, and even of 'art,' commoditizing the eternal, hyping the primal? Our time is the sine qua non of our identity. We need to take extreme measures to reclaim it for ourselves and each other."

RFNAL, an artifact that emerged from deep within this learning/unlearning process, is an uncompromising exercise in the mechanics of using sound as a way to radically reclaim time from capitalism. It is a tremendously haunted and haunting recording. Throughout the 30 minute piece there is a distinct absence of recognizable musical signifiers such as melodies, chords, traditional arrangements or structures of any kind. Instead there is an emphasis on the ability of multitrack recording to overlay multiple spaces and time frames in the service of disrupting the linear notions of time forcibly imposed by Eurocentrist thought and its settler-colonial implementations. While one can place certain of the sounds that interpenetrate these textural layers amongst instrumental groupings such as wind, string, brass and electronics, even the exact instruments used are opaque because of the way they are approached; not as tools to reproduce the recognizable and externally imposed rules of “how music goes” but as weapons and charms to delineate a sacred space of communion with nature and the dead based on an internal and embodied imperative. Although the original cassette of RFNAL was only re-discovered after the release of Secret Passage, there are many links between the two; most directly, RFNAL includes as part of its source material, the recording of Rayna and her cousin Mike Kelley (Kelley Polar) making sound in the East Side Rail Tunnel which served as the inspiration for “Ghosts Wail In Us”. At a deeper level, though, the type of episodic drift continuity that is so palpably on the surface of RFNAL is a journey into Rayna’s music in its most essential and starkly revealed form. This continuity and approach to sound making is central to all of her later work. It is the deep skeleton upon which somewhat more conventionally “musical” projects such as Black Meteoric Star, The Days of Mars, The Crystal Ark and even Paper Eyes were crafted and is what gives those projects their unique “hypnotic” quality. Her work on Secret Passage, though, saw a re-awakening of the emphasis on this skeleton as a central audible focus, raw and exposed anew. This use of episodic drift continuity and lack of easily identifiable signifiers is particularly evident in the cassette version of Secret Passage on which the individual tracks blur and blend together. RFNAL was originally composed as a way for Rayna to deal with childhood trauma that was being reactivated by two close friends of hers that were constantly fighting, with the additional hope that it might function as a spell to cool the animosity between them. Resurrecting it now perhaps it can fulfil these functions on a wider level. At minimum, RFNAL provides a remarkable window into the early seeds of Rayna’s compositional approach and opens an expanse of undulating temporality that stands in stark contrast to the timelines of consumption and the marketplace.

This digital only release includes a download of several written texts by Rayna from 1995 as well as additional archival materials.